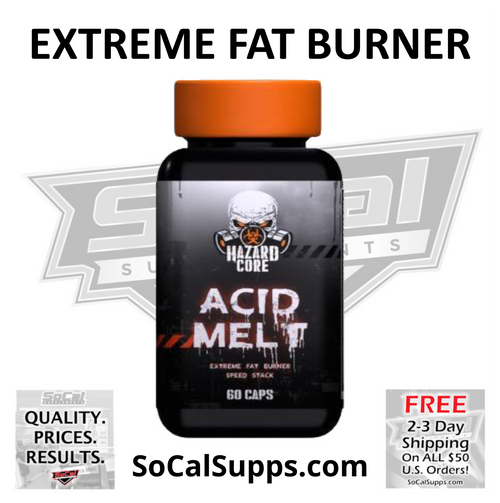 Are you not coping with the fatty tissue accumulated in your body? This means it’s the right time to burn it off! Acid Melt, a new burner from the Hazard Core, will help you do that.

Its name is not accidental. The compounds it contains are so potent that your fat tissue will even start melting. Of course, you have to help it do so by training regularly and maintaining a calorie deficit. However, if you are ready for hard work, Acid Melt will be your ally in achieving your figure goal.

What can you find in the composition of this burner? Here’s a list of its key ingredients:

– 1,3-dimethylamylamine  – even if caffeine doesn’t make much of an impression on you, combining it with DMAA will annihilate your fatigue. DMAA is one of the most vital substances with a stimulating effect. Thanks to it, you can effectively fight off the attack of even the most powerless and unwilling to act!

– Green tea leaf extract – drinking green tea may not only soothe your nerves but also help you fight excess weight. All thanks to the fact that these green leaves are full of beneficial compounds. That is why Hazard Core used a unique extract that contains the highest possible concentration of active substances.

– Mucuna Pruriens – the seeds of this plant contain a very interesting amino acid. It is known as L-Dopa because it is a direct precursor of dopamine. Not surprisingly, including it in your supplementation can provide visible effects in terms of mood enhancement. Furthermore, L-Dopa also stimulates the synthesis of adrenaline and noradrenaline. Both of these hormones can work wonders during physical activity.

– ß-Phenylethylamine (PEA) – PEA is a natural alkaloid that also occurs in the human body. It has a significant effect as it can increase the body’s exercise capacity and at the same time support fat burning. This, in turn, makes supplements containing this compound increasingly popular.

– Alpha-GPC – adequate brain support, higher levels of concentration, increased alertness and attention; these are the acute effects of taking Alpha-GPC. Choline alphoscerate is a precursor to acetylcholine, an essential hormone for the entire nervous system.

– Cayenne pepper – the hot taste of cayenne pepper is due to capsaicin, which can also be found in other hot peppers. Capsaicin speeds up metabolism, which makes the body much better at burning fat.

– Yohimbe bark extract – initially, Yohimbe bark was advertised primarily as an aphrodisiac. However, later studies confirmed that the compounds contained in the bark of this African tree could increase libido. However, the potential of Yohimbe to promote calorie burning should not be overlooked.

– Bitter orange fruit extract – bitter orange fruit contains synephrine, an active substance with stimulating solid properties. In addition, its consumption leads to an increase in body temperature, which only intensifies the reduction of fat tissue.

– Sulbutiamine – synthetic sulbutiamine was invented as a derivative of vitamin B1. Scientists have shown that this compound supports cognitive function and gives energy. In addition, it may also speed up metabolism.

– Vitamin B6 – can vitamins aid weight loss? Vitamin B6 proves that it can! It participates in processes related to fat and protein digestion. This means that its appropriately high level will ensure the optimal course of such operations.

– Hordenine HCL – supplementation with hordenine may significantly increase noradrenaline synthesis, making the body better able to withstand prolonged physical activity. This effect is very desirable as it helps to maintain the training plan during the weight reduction phase.

– N-caffeoyldopamine and N-coumaroyldopamine –both of these compounds are found in cocoa fruits. They show a mild stimulating effect, but at the same time, they strongly stimulate processes occurring during fat burning. Therefore, they are very useful during weight loss.

– Higenamine HCL – higenamine is another compound that increases blood pressure and thus enhances the body’s exercise potential. This, in turn, makes it a popular ingredient in many fat burners.

– Halostachin HCL – taking halostachin increases the secretion of two essential hormones: adrenaline and noradrenaline. As a result of their increased synthesis, the body gets a strong internal stimulus, which provides an extra dose of energy.

– Extract from noble dendrobium – the alkaloids in dendrobium have a positive effect on digestive processes. This makes them support metabolism and thus accelerate weight loss.

– Octopamine HCL – maintaining a calorie deficit requires an apparent reduction in the amount of food consumed. This can be helped by octopamine, which speeds up the metabolism and suppresses the feeling of hunger. It is an ideal combination during a reduction!

-Piperine – although Piperine can aid weight loss, piperine is mainly known for its unique ability to increase the absorption of nutrients. As a result, piperine provides more impressive benefits from supplementation.

– Chilli Extract – Extract derived from spicy chilli peppers is an additional source of capsaicin. Its presence shows how valuable this substance is in the fight against excess weight.

– Grape seed extract – Grape seeds are not only used for oil extraction, as the Extract obtained from them has exciting properties. Suffice it to say that the compounds it contains improve the work of the cardiovascular system and speed up metabolism.

– Hoodia Gordonii extract – substances found in this plant can suppress hunger and limit appetite. Combining them with octopamine will make the effect even more intense.

– Niacin (vitamin B3) – niacin, or vitamin B3 or PP, can aid weight loss. This is because this compound is involved in all the essential processes that occur during the breakdown of fats.

– Vitamin E – intense physical activity leads to an increase in the concentration of free radicals in the body. To counteract this, it is worth increasing your intake of vitamin E. After all, it is one of the most potent antioxidants!

– Yohimbine HCL – pure yohimbine increases libido and improves sexual performance. Moreover, it stimulates the synthesis of adrenaline, thanks to which it complements the effects of other compounds contained in Acid Melt.

– 3’5′-Diiodo-L-thyronine – problems with weight reduction may be caused, among other things, by a malfunction of the thyroid gland. However, this compound is a synthetic equivalent of the hormones produced by this gland. As a result, it supports the natural hormones in burning fat tissue.

The manufacturer recommends taking just one capsule of Acid Melt immediately before training. The capsule should be taken with plenty of water.

REIGN: The King of Fat-Burners